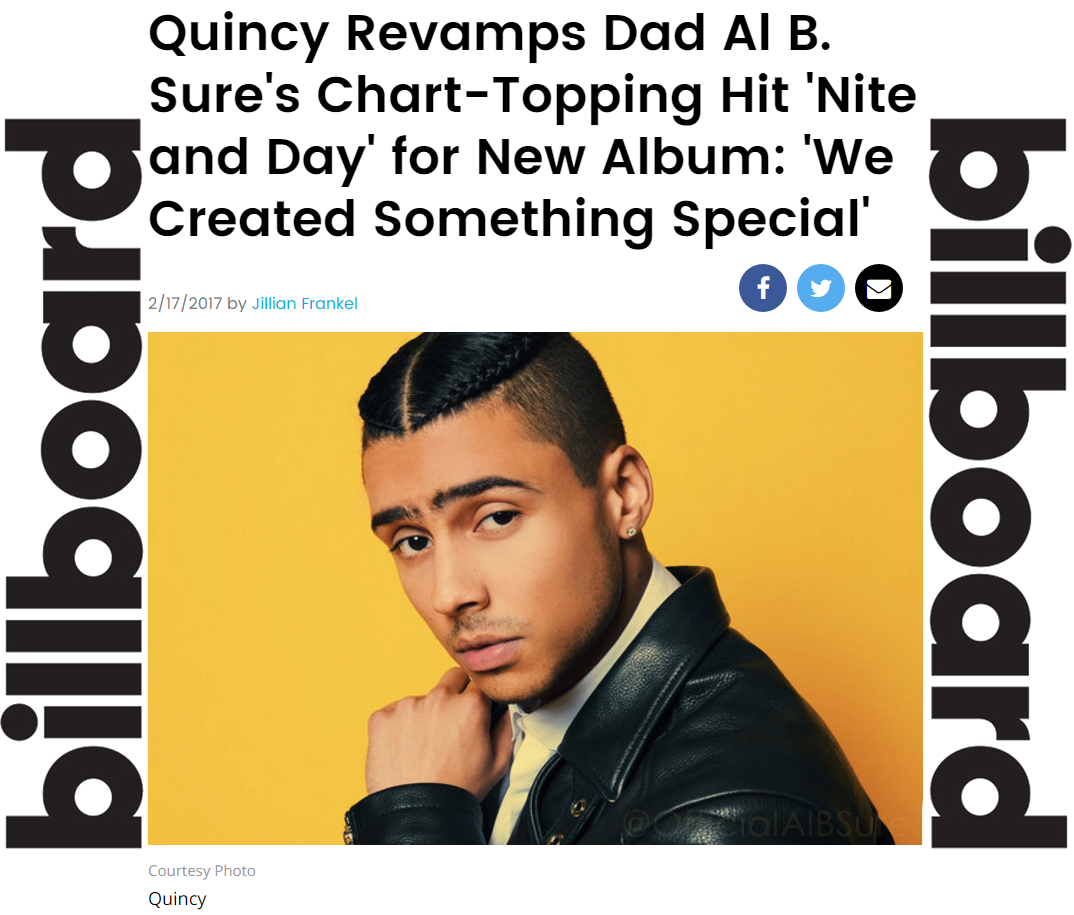 Nearly 29 years after Al B. Sure!’s classic hit “Nite and Day” hit No. 1 on the Hot R&B/Hip-Hop Songs chart, the track has returned with a fresh spin — this time covered by Sure’s biological son, singer and Star actor Quincy.

“I didn’t want to devalue the beauty that is, was, and always will be in (the original),” Quincy tells Billboard. “I’m not trying to present this as the new ‘Nite and Day.'” The revamped tune — titled “I Can Tell You (Night & Day 2.0)” — is found on Quincy’s new album, This Is For You, which was released on Feb. 14. Sure’s original take spent three weeks atop the Hot R&B/Hip-Hop Songs chart in April and May of 1988.

Quincy — who is the adopted son of Sean “Puffy” Combs and godson of Quincy Jones — stars as Derek on the Fox TV series Star alongside Queen Latifah.

“Me and my dad, our communication level started to increase,” says Quincy, referring to his previous estrangement with Sure, and their eventual reconciliation. “I kind of surprised him with [the remake]. I didn’t talk to him about it like ‘This is what I wanna do.’ I just wanted to put my all into it and almost surprised him with it — like ‘Hey, let’s hang out. Let’s go in the studio, I want you to hear some stuff.’”

“It almost came as a surprise,” says Quincy, “so I got to experience a fun, crazy, emotional moment just because he didn’t even know what he was walking into. Thankfully it was of his liking. Because he is the creator of this record and obviously you don’t want to mess with something that you can’t put your all into and I definitely think we created something special. It makes sense for who I am and that being my father, there was no pressure at all. It was almost something that was supposed to happen.”

With regards to the album, Quincy says, “I knew I was bringing this on Valentine’s Day so I wanted to introduce a little bit of what I go through as a man, whether it’s dealing with love or different moments in life. Life is made up of a billion moments and each one, you can talk about for hours. I’m speaking for myself, the moments I’ve lived.”

Quincy says he is currently wrapping up filming Star and hopes to shoot a movie during his time off as well as produce his first label album with Epic Records that will be released this summer. (This Is For You album was released independently.)

View the complete track list for This is for You below: