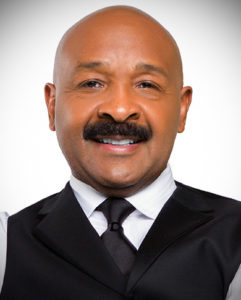 The former IBM executive started his career in the entertainment industry as a stand-up comedian in Houston, Texas. It wasn’t until the Showtime cable network listed McDonald as one of the top 50 comedians in the United States for three consecutive years that he decided to leave IBM to seriously pursue a stand-up comedy career. McDonald and Steve Harvey’s friendship began on the comedy stage in Houston when Harvey was McDonald’s opening act at a hotel comedy club. Their friendship further developed when Harvey offered McDonald a position as a writer for his first TV sitcom, ABC’s “Me & the Boys.”

In 2001, Harvey and McDonald became business partners when they created “The Steve Harvey Morning Show.” The radio show began in Los Angeles on Radio One’s “The Beat” and grew into a highly successful syndicated morning show that launched in September of 2005 with Premiere Radio Network.

In addition, in 2001, they created the Hoodie Awards show, which gives recognition to local businesses, religious establishments, and community leaders who serve their neighborhoods. Celebrating its 10th anniversary in 2012, it is the only awards show where communities from around the country nominate and vote for the winners in each category.

McDonald holds a mathematics degree from the University of Houston and is a lifetime member of Omega Psi Phi Fraternity, Inc.

“Steve Harvey” is produced by Endemol USA and taped before a live studio audience at the state-of-the-art HD NBC 5 studios in downtown Chicago.   Alex Duda, Harvey and McDonald serve as executive producers. The show is distributed in national broadcast syndication by NBCUniversal Domestic TV Distribution.